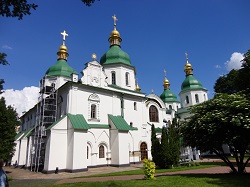 We visit the beautiful capital city Kyiv and the former Mennonite colonies Chortitza and Molotschna near the city of Zaporozhye.

Ukraine is a country with a rich cultural past, and capital city Kyiv as the vibrant heart.
From 1789 Mennonites emigrated from Gdansk and environment to the Ukraine, at the invitation of Empress Catherine the great. Their main motive was to find more religious freedom and farmland. They settled in Chortitza on the Dnieper, the mother colony. Later on, other colonies as the Molotschna came into being. The Russian revolution of 1917 marked slowly but surely the end of the Mennonite culture in Ukraine.
On this trip we go looking for the remains and legacy of the once rich flowering Mennonite culture. We try to understand what drove these people in their expectations, values and imagination. In addition to the history there is also a focus on the present: we visit a number of Mennonite social aid projects of international Mennonite organizations (MCC), that settled again in these former Mennonite areas. These organizations try with Word and deed to increase the standard of living of the poorest of the poor.

The Tour from Day to Day

We gather from different parts of the world in our hotel in Kyiv. Kyiv on the Dnieper River offers next to the historic Orthodox churches and the famous Russian Orthodox monasteries a modern Centre with a busy street life. We will share a get-acquainted dinner and preview the tour. Hotel in the heart oft the city center of Kyiv for 3 nights.

Today we explore Central Kyiv on foot and by subway. A ride on the subway system dating from the Soviet period is a must. Via a long escalator we come on top of the main square Maidan Nezalezhnosti. This square was the center of the orange revolution in 2004, when Viktor Yushchenko after fraudulent elections called on the Ukrainian people not to accept the victory of its opponent. We admire the St. Sofia Cathedral from the 11th century and the blue St. Michael Golden Dom Cathedral. We walk further along the Andrew Street, an artist's street full of original cottages and craft shops. En route we visit the St. Andrew Cathedral and we enjoy the view of the Dnieper River. The Andrew Street ends in the lower district of Podil with the Chernobyl museum. The exhibition gives us an overview of the events in Chernobyl in 1986 and the enormous impact of the melt-down for the world. The subway takes us back to the hotel. 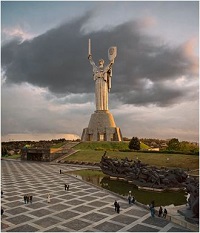 Just outside the city centre of Kyiv we find the Pecherska Lavra Monastery, decorated with dozens of Golden domes. A Lavra monastery is a Russian orthodox head monastery and as such an important place of pilgrimage. The complex dates from the 11th century and is still in use. It is located beautifully on the high right bank of the Dnieper River and is divided into an upper and lower monastery. The State-owned upper monastery is a museum; the lower monastery is still inhabited by Russian Orthodox monks. Under the well-kept monastery buildings is a labyrinth in which dozens of monk-mummies are exhibited by candlelight. Pecherska Lavra is located not far from the Rodina Mat monument, an imposing remnant from the Soviet period and especially interesting as a symbol of a past era. The 62-meter-high statue of a female Victor, 'the mother of the nation' is a tribute to the millions of Ukrainian victims of the second world war and is reminiscent of the statue of liberty in New York.

Today we drive from Kyiv to Zaporozhye. The journey takes about 10 hours. We enjoy the rolling Ukrainian landscape and the accompanying views. Just before reaching Zaporozhye we stop at the farm of the Canadian Ken Hooge. Ken owned one of the largest farms of Canada and after his retirement he started a new farm in the Ukraine with the aim to help the local population. In cooperation with an American Mennonite relief organization he has set up a learning-and-working farm for orphans from Zaporozhye.
We stay 6 nights at the 4-star Intourist hotel in Zaporozhye.

The city Zaporozhye is situated in the Centre of the former Mennonite colonies. All areas can be reached from Zaporozhye. Today we visit the village of Chortitza and Rosental in particular. Here the first settlers had their meeting place under legendary 1000-year old oak tree in 1789. We also find here a number of buildings of Mennonite origin such as houses, schools and factories, all clearly recognizable from the surrounding buildings.

We attend a church service of the Mennonite congregation of Boris Lettkeman in Zaporozhye. Here we will have lunch too. In the afternoon we take a boat trip on the Dnieper River around the Chortitza island. Before the Mennonites came to the Chortitza island, for centuries the Cossacks had a fortress here. A replica of this fortress and the Cossack museum have become major tourist attractions on the island.

It is about 2 hours’ drive to Halbstadt (now Molochansk) in the Molochna. We are welcomed into the Mennonite Center, an aid project of the Mennonite Brethern Church from Canada. Here we meet our guide who accompanies us for the rest of the day. We visit villages like Gnadenfeld, Ohrloff, Waldheim, Alexanderwohl, Tiege and -if possible- those requested by tour participants.

Today we visit the Molotschna colony for a second day, with an emphasis on the northern part of the area. There is also an opportunity to visit other colonies individually and at own expense, like Bergthal, Borozenko, Fuerstenland, Sagradovka and more. Transportation and guides will be available.

In the morning we visit MCC, the Mennonite Central Committee, in Zaporozhye. MCC tries with local partners to offer social assistance to the poorest of the poor in this city and the surrounding area. We will also visit one of their projects.
Dnjepropetrovsk was the capital and political centre of the province where the Mennonites established their colonies. The Mennonite John Esau was in the early years of the 20th century even Mayor of this city. In the afternoon we are led by a local guide along what's left here of the presence of the Mennonites.

We drive back from Zaporozhye to Kyiv Borispol airport where we are lodged in a hotel near the Airport. We will partly drive a different way back. Here the tour ends with a fare well meal and a lot of new memories.

The tour will be led by Ayold Fanoy. Ayold is a Mennonite theologian from The Netherlands and graduated from the Mennonite Seminary in Amsterdam. Because of his interest in Mennonite history, he has focused on organizing tours for both Dutch and American and Canadian Mennonites, under the name Mennonite Heritage Tours. Ayold has led over 20 Mennonite tours in Europe.

The fare does not include:

The size of the Group has a minimum of 6 and a maximum of 15 participants.
The tour involves walking in a number of places. While the walking will not be strenuous, persons contemplating the tour should be able to manage a moderate amount of walking. If in doubt, please contact Ayold Fanoy.